On the 13 December 1940, at 590 Romford Road, Manor Park, London. Captain Blaney attended an unexploded bomb. The bomb was fitted with an anti disturbance fuse and a clockwork fuse. On assessing the situation Captain Blaney and Lieutenant Richard James decided to steam out the explosives and called for the steam sterilising equipment. The lorry carrying it broke down on route. At the site they had a magnetic clock-stopper and an electric stethoscope. It was thought best to fit the clock-stopper and then hoist it out. This would then be transported to Wanstead flats where it could be dealt with away from property. As they lifted it was found that the lifting strop fouled the clock-stopper. Therefore it would have to be removed till the bomb was clear of the hole. A rope was threaded through a pulley suspended from a joist in the house and members of the team pulled to lift the bomb. As it was lifted slowly it began to swing, Capt Blaney stepped forward to steady it. The bomb detonated it was positioned above the ground. Captain Blaney, Lieutenant R. James, Staff Sergeant C. Roberts, Lance Corporal D. Mills, Sappers S. White, E. McLaren, J. Maycock and Drivers J. Lauchlan, J, Pickering and a police Superintendent who was watching from across the road died. Staff Sergeant Fox had a close escape, Staff Sergeant Roberts who was on listening watch on the stethoscope at safe distance, asked to change places as he was get cramped and cold. A few minute later the bomb exploded, the clockwork fuse was not heard ticking so it is believed that the anti disturbance-fuse detonated the bomb. An eight year old local resident, Terrance Trimmer was walking home from school when it exploded, with his mother and sister. His mother was injured by shrapnel in the leg and was taken to Aldersbrook Hospital. Terrance the next day found one of the soldier’s metal buttons embedded in the Off Licence door frame. A road in the Borough of East Ham was named after him Blaney Crescent. Captain Blaney was awarded the George Cross posthumously for his actions. 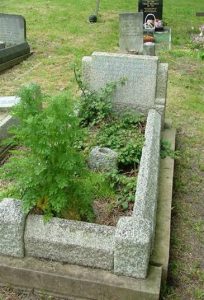