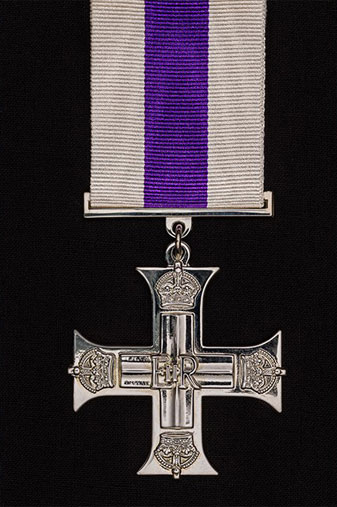 Instituted in 1914, the Military Cross (MC) was issued for gallantry in presence of the enemy to warrant and junior officers of the Army who were ineligible (on account of their rank) for the Distinguished Service Order. During the First World War, it was also available to equivalent ranks in the Royal Naval Division and Royal Marines and it later became available to equivalent ranks in the RAF for acts of gallantry on land.

Instituted in 1914, the Military Cross (MC) was issued for gallantry in presence of the enemy to warrant and junior officers of the Army who were ineligible (on account of their rank) for the Distinguished Service Order. During the First World War, it was also available to equivalent ranks in the Royal Naval Division and Royal Marines and it later became available to equivalent ranks in the RAF for acts of gallantry on land.

The equivalent award for the other ranks for gallantry on land in presence of the enemy was the Military Medal (MM) which had been instituted in 1916 and, similarly to the MC, later became available to RAF other ranks serving on the ground.

Lieutenant Rider was a Troop Commander and Bomb Disposal Officer (BDO) in the Joint Force EOD Group since February 2003, deploying to Iraq on Operation TELIC as part of 15 Air Assault Brigade. His Troop was responsible for providing EOD support to the Brigade in order to enhance freedom of maneuver and force protection. On 23 March 2003, he was deployed to the North Rumaylah Bridge (NRB), a strategic target for the Brigade that needed to be secured intact and made safe from Iraqi demolitions designed to destroy it.

With the far bank not yet secure and enemy artillery fire still incoming, Lieutenant Rider’s mission was to make safe the NRB that had been hastily prepared for demolition by the Iraqi Army. This required him to gain access to the bridge surfaces and piers that had been rigged for demolition and both remove the means of initiation and the explosives. His in itself was was an extremely demanding task due to the dimensions of the bridge and the positioning of the charges, but he was also under considerable time pressure to complete the task. Without yet having clear eyes on the bridge or definitive confirmation of the location of the enemy demolition firing point, Lieutenant Rider clambered down the home bank without any real care for his own safety and began to access the charges. The sheer scale of the problem soon became evident and he set up a small reconnaissance boat ‘ferry and line’ in order that the explosives could be removed from the bridge and carried to safety. The scope of the task and possibility of enemy action meant that he had to constantly go back to first principles and improvise, however, the margins for error were almost non-existent.

The Iraqi demolitions had been hastily prepared, with hundreds of detonators thrust haphazardly into the explosives as the primary means of detonation. At this stage, only one of the demolitions had functioned, causing a single span of the six span bridge to collapse, leaving the majority of the bulk explosives to be removed. Throughout this operation, if any of the detonators had functioned, there would have been a huge sympathetic detonation of all the bulk explosives and the bridge potentially lost To Coalition forces, as the bridge and resulting gap would have been to big to have been bridged by UK assets. This would have been a major setback for the Brigade and this further added to the pressures placed upon Lieutenant Rider. Throughout this operation, Lieutenant Rider would have known that his actions could easily lead to the detonation of the explosives and his own death. The tiring removal of 200 kilograms of PE4(A) explosives, with hundreds of detonators in varying states of decay which were inherently unsafe, was conducted under cover of darkness, further complicating the operation. After a continuous 30 hour operation and under considerable stress, Lieutenant Rider declared the site clear and the bridge was secured.

Lieutenant Rider’s actions were witnessed by CO 3 PARA Battle Group, Lieutenant Colonel J G Lorimer and he confirms that his bravery under extreme conditions was far in excess of that expected of someone of his relatively junior rank and he was fundamental to the successful seizure of this key target. His contribution to the operation, during which the risk of his life has been significant, his total commitment, courage, and professionalism was inspirational and he is most strongly recommended for formal recognition of his actions.