On the 14th October 1940 at Chapel Street, Coventry, 2nd Lieutenant A.F. Campbell, Sergeant M. Gibson, Sappers W. Gibson, R. Gilchrest, A. Plumb, R.W. Skelton and Driver E.F.G. Taylor were tasked to deal with a 250 kg unexploded bomb. After nearly four days it was uncovered, it was fitted with standard fuses, these were so badly damaged that they could not be removed. The electrical charge was thought to be dissipated by now, however Campbell applied a discharge tool just in case. On the 18th October 1940, 2nd Lieutenant Campbell believed the bomb was inert and could be moved. It was loaded onto a lorry and taken to a safe open space outside Coventry, possibly Whitley Common. As it was being unloaded it exploded killing all. Both 2nd Lieutenant A.F. Campbell and Sergeant M. Gibson were awarded posthumous George Cross’s for Bomb Disposal tasks. 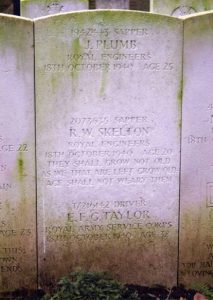