Incident. A bomb had been reported approximately a mile from Hook Railway Station, Hampshire by the local signal man. The bomb had to be removed urgently as it was holding up trains. 48 Bomb Disposal Section attended the incident. The following details were related by a daughter of the signal man at a memorial service arranged by 25 Re-enactment Bomb Disposal Group at Hook station in 2007. I was eleven years old at the time and with my sister had been sent up to where the Bomb Disposal Section, were working, to give them some sandwiches and tea. As we got to a safe distance our Dad stopped us and said they were working and he would pass on the food to them. We talked to my Dad and then turned to go home as we got a bit away there was an explosion. We returned to my dad and found the section had been killed. Lance Sergeant W.J. Button was also working on this site. He was thrown through the air by the force of the explosion and survived. He was able to check on the injuries to his section. He was awarded the George Cross for his actions.

Son of Frederick James Vince and of Esther Vince of Nunney, Somerset. Died on the 18th August 1940. Aged 23. Buried at Aldershot Military Cemetery. Grave A 24. 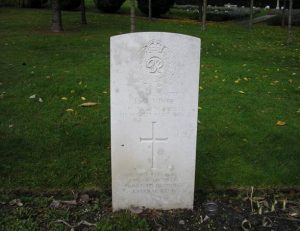