On the 5th February 1941, 2 Bomb Disposal Company were tasked with uncovering a unexploded bomb dropped on the 5th at Purley Oaks School, Bynes Road, Croydon. Lance Sergeant Brinton left the site to check on progress of another bomb being dug for in a garden nearby. The section were left working towards the bomb under the playground. Brinton had only got a street away when the bomb exploded. On returning to the site he found the school and several houses were damaged and all had been killed bar the section driver, who had seen a Warden approaching inside the cordoned danger area and had escorted him back to the safety barriers when the bomb exploded. Details extracted from Bomb Disposal British Casualties of WW11. Chris Ranstead. 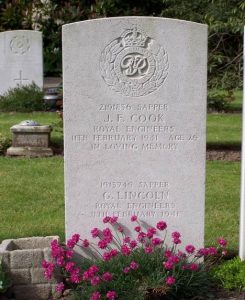