Sapper L.D.G. Allsopp with Staff Sergeant S. Cullingworth was ambushed on the outskirts of Al Zubayr, Iraq. They were taken to the Iraq Military Intelligence compound were they later died from gunshot wounds. There bodies were found just under a month later in a shallow grave not far from the town.

Died on the 23rd March 2003. Aged 25 Buried at All Saints Church, Wimbish, Essex. Lieutenant Colonel Anthony Troulan, Commanding Officer 33 Engineer Regiment, Explosive Ordnance Disposal said: “Luke Allsopp was a very capable individual who was well-liked within the Squadron and a valued team member. He had served within bomb disposal in Cyprus and Kenya. He leaves behind a loving family and girlfriend, Katy.” Sergeant Sean McLoughlin told mourners that Luke was affectionately known as “Muscles.” “He lived life to the max and he enjoyed it, we can be certain he is with us now with a pint in his hand, drinking his farewells.” “He lived as a soldier and he died as a soldier. A soldier fighting for peace and for right.” 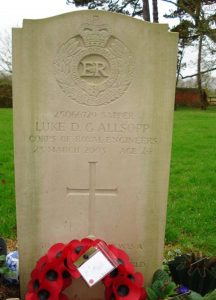 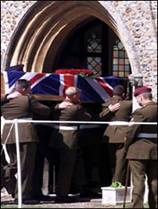