Son of Artro and May Williams of West Derby, Liverpool. Died on the 27th October 1944. Aged 20. Buried at Tripoli War Cemetery. Grave 7. G. 26. Tripoli War Cemetery. During the North Africa campaign, Tripoli was an important Axis base until taken by Montgomery’s forces on 23rd January 1943. It then became a hospital centre, and burials in the war cemetery were almost entirely from the hospitals, which included Nos 2, 48 and 133 General Hospital from March 1943, and No 89 General Hospital from April 1944. Tripoli War Cemetery contains 1,369 Commonwealth burials of the Second World War, 133 of them unidentified. 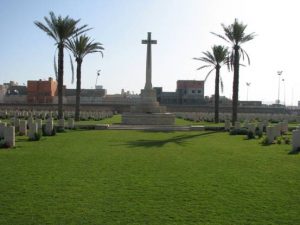