Incident A bomb was dropped outside a Catholic School and Sergeant W.F. Glover went into the crater to defuse it and make it safe. The bomb had penetrated a disused coal mineshaft. Sergeant Glover was overcome and died by carbon monoxide poisoning. Sapper A.E. Williams a member of the section donned his service respirator and attempted to rescue Sergeant Glover, he also died from carbon monoxide poisoning as the service respirators were not suitable for this form of gas. It was one of the many tragedies of war. Thanks to Sergeant Glover’s son for sharing these details with us. The following has been written by Sergeant W.F. Glover’s son. My father was a well known parishioner of Saint Anne’s and was better known as Billy Glover. He died whilst serving his country at Morpeth in Northumberland on the 7th September 1940. His body was brought back to Sutton and he was buried in the family grave, with his father William Henry, mother Catherine Agnes and baby sister Elizabeth Mary. Sergeant Glover had three sons, the eldest Alex was aged eight when his father died. Also buried in the grave is my mother Annie Gladys Glover, (nee Anderton) another well known family in Sutton. Her father was the gardener/maintenance man at Saint Ann’s Convent for forty years. Billy Glover was a popular athlete in the area he was the West Lancashire Junior and Senior champion at one mile and one many events with Sutton Harriers, whom he was secretary for many years. He also ran for the Royal Engineers team after he was called up for military service at the outbreak of war in 1940. Having trained as an expert on bomb disposal he was sent into action immediately and defused the first 2000lb bomb which was dropped on London and many more before being posted. He was posted to the North East of England in charge of a platoon, and this is where he died. 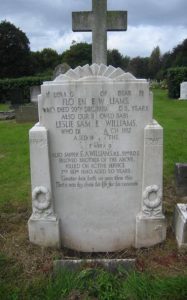