Son of Arthur Henry and Eveline Nary Talbot of Newport, Shropshire. Died on the 9th October 1941. Aged 21. Buried at Catania War Cemetery, Italy. Collective Grave I. H. 19. George Cross Citation. Lieutenant Talbot was awarded the Empire Gallantry Medal in 1940, whilst serving with 103 Bomb Disposal Section in Wales; this was automatically changed to that of the George Cross by the terms of the institution of that decoration. The citation in the London Gazette of 17th September, 1940, gives the following particulars: On 24th/25th August, 1940, Lieutenant Talbot, after being present during the whole twelve and a half hours which was required to dig down to an unexploded bomb, diagnosed, when it was brought to the surface, that it was fitted with a delayed action type fuse. As the bomb appeared to be of a new type, he decided that it should be removed to a place where it could do no damage if it exploded. Keeping his men under cover, he carried it on his shoulder to a safe spot two hundred yards away. From the start of the work, there was a risk of the bomb exploding, and Lieutenant Talbot set a fine example of courage and devotion to duty. Malta Service. Lieutenant Talbot was posted to Malta in November 1940 to lead the Island’s first RE Bomb Disposal Section. He brought with him state of the art equipment, which had recently been developed. This was soon put to use as in January 1941 the German bombing onslaught was to begin. Lieutenant Talbot, Lance Sergeant R.C. Parker, Sapper D. McCarthy, L. Miller and J. Leonard were to be specially commended for the dangerous and valuable work they undertook in dealing with a 1,000kg unexploded bomb in Vittoriosa on the 21st January 1941. After six months service in Malta Lieutenant Talbot was relieved in May 1941 and after a brief respite was appointed as a liaison officer with the RAF. On 9th October 1941 he was a passenger in a Royal Air Force Blenheim on an operational sortie over Sicily. He was killed whilst flying on the mission. Lt George Carroll who relieved Lieutenant Talbot in Malta said of his predecessor: “he was friendly with a great sense of humour. Edward told me about his medal award – he was in some ways quite dismissive about it. He really gave the impression that he believed others were more deserving. 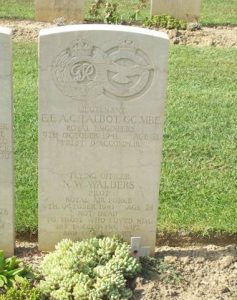