On the 12th May 1941. Charles Howard Earl of Suffolk, who was a member of the Ministry of Supply’s Department of Scientific Research. This department’s role was to obtain complete examples of fuses and bombs to experiment with. Working with a team of seven, his chauffeur Fred Hards, secretary Miss Eileen Morden with Staff Sergeant J. Atkins, Driver D. Sharratt of 25 Bomb Disposal Company and Sappers R. Dutson, B. Gillett, J. Hardy of 719 General Construction Company attached to 2 Bomb Disposal Company, were working on Erith marshes. Charles Howard was attempting to remove two fuses from a 250kg SC bomb, which had been dropped some eighteen months previously. They were visited by Doctor Gough, Director of General of Scientific Research who checked out the work procedures. After he had left the bomb exploded, killing all. C. Howard Earl of Suffolk was awarded a posthumous George Cross. F. Hards and E. Morden Posthumous Commendation from his Majesty the King for brave conduct in civil defense. Details from Bomb Disposal British Casualties of WWII. Chris Ranstead. 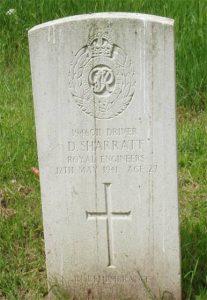