Note: On 11 April 2012, Sapper Ray was involved in a search and clearance operation in the Nad 'Ali district of central Helmand near to Checkpoint Kahmanan. The aim of the mission was to clear a compound previously used by insurgents, allowing the local population to safely return to the area. During this operation Sapper Ray was seriously injured in an IED strike. He received immediate medical attention before being taken to the Camp Bastion Role 3 Hospital and was later evacuated to the Queen Elizabeth Hospital in Birmingham. Sapper Connor Ray, aged 21, from Newport, started his military career in January 2008 at the Army Foundation College in Harrogate. He joined the Corps of Royal Engineers in June 2009 and qualified as a Building and Structural Finisher upon completion of his trade training at Chatham. He joined 49 Field Squadron (Explosive Ordnance Disposal), 33 Engineer Regiment (Explosive Ordnance Disposal), in April 2010, where he trained as an Advanced Searcher. He was kept busy in his specialist role, which included providing support for a number of high profile events. During his time in Afghanistan, Sapper Ray and his team successfully undertook a number of high risk searches which undoubtedly saved numerous British and Afghan lives. A popular young soldier who was cheerful and engaging, Sapper Ray showed much promise. He was professional and dependable and was well liked by those that knew him. He leaves behind his brother Vinnie, stepfather Steve, sisters Hollie and Bonnie, and girlfriend Hollie. The family of Sapper Ray have made the following statement: "We are intensely shocked, distressed and saddened after losing our hero Connor Ray, who died as a result of injuries sustained in Afghanistan. We are all tremendously proud of Connor. Connor was part of Britain's engineer search unit - 33 Engineer Regiment (EOD); he was critically hurt last Wednesday, the eve of his 21st birthday. "He loved his time in the Army and made great friends. Connor was a hero to all of his family and friends; brother Vinnie, 21, sisters Hollie, 17, and Bonnie, 16, Aunty Eileen, stepfather Steve, grandparents Leo and Linda, Keith and Sue, girlfriend Hollie, and all of his good friends and family will miss him terribly. "In heaven with his mum now, we will always remember his love of life, his sense of humour and cherish the short time he had to touch our lives. We would like to thank everybody for their kind words, love and support at this tragic time." Lieutenant Colonel Simon Bell, Commanding Officer 33 Engineer Regiment (Explosive Ordnance Disposal), said: "The tragic loss of Sapper Ray has shaken both the EOD and Search Task Force and the Regiment deeply. At this most difficult time my thoughts and heartfelt condolences are with his family and his many friends. "An extremely positive and determined young soldier, Sapper Ray was a real team player. Amiable and upbeat, he had a natural ability to encourage and inspire others with his limitless optimism. He would often be found in the gym, working hard to maintain his fitness, whilst setting an excellent example to those less motivated. A very professional soldier, he had taken to the extremely challenging role of being a High Assurance Searcher with gusto and had already demonstrated significant potential in this specialist role. Sapper Ray undoubtedly had a bright future ahead of him. "During physically and emotionally demanding times here in Afghanistan, Sapper Ray remained his upbeat and professional self. Hard working and dedicated, his positive attitude had a tangible effect on those around him. He easily integrated into an Advanced Search Team from another Squadron, quickly making his mark and new friends. Sapper Ray epitomised the 'One Team' ethos of the disparate Explosive Ordnance Disposal and Search Task Force and was an absolute pleasure to have within the Unit. "The Corps of the Royal Engineers has today lost an inspiring young soldier who was certainly going places. He set an excellent example to others, had many friends and leaves a gap in our ranks. He will be sorely missed by all members of both the EOD and Search Task Force and his Regiment, but never forgotten. His family and friends are in our thoughts and prayers at this time." Major Ben Hawkins, Officer Commanding Operations Squadron, Explosive Ordnance Disposal and Search Task Force, said: "Deliberately going into an area suspected to contain improvised explosive devices is perhaps one of the most challenging jobs in the world; to do so takes a certain type of character. It demands a stoic resolve and resolute dedication. Sapper Ray had these virtues in abundance. "I have known Sapper Ray for nearly a year; he was always happy, never more so than when busy. Always smiling and exceptionally personable, Sapper Ray had the kind of 'can do' attitude that every commander would want in his soldiers. "His quick wit and easy going nature endeared him to all who had the privilege of working with him. He was an ideal and immediate choice to integrate into a Search Team from another Squadron; such was our faith in his abilities and character. In short he was a fine soldier, ideal Sapper and an excellent searcher. "Sapper Ray's loss will be keenly felt by my Squadron and in particular by those many who were privileged to have been his friends." Warrant Officer Class 2 Kevin Prevett, Squadron Sergeant Major, Operations Squadron, Explosive Ordnance Disposal and Search Task Force, said: "From the offset, I recognised that Sapper Connor Ray was a superb soldier. He never failed to impress those around him with his infectious wit and humour. Totally professional and reliable as a young Royal Engineer he would, without question, have been a future leader of men. My abiding memory of Connor is simply his smile, which infected those around him. It was these qualities, to name but a few, which will be cherished by his friends and colleagues of the Royal Engineer Search community. The lads and I will never forget him." This website was built using the InstantPro Website Builder from Free 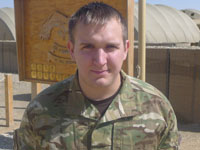