Son of Ernest John and Alberta Cecilia Ranson, of Ipswich, Suffolk Date of Death between 10/021942 and 15/02/1942 Buried Kranji War Cemetery, Singapore. Grave 18C. 19-20 Prisoner of the Japanese 1 Malaya Bomb Disposal Company, was part of the Singapore Fortress. Lance Corporal G V Ranson could have died when the Japanese attacked across the Johore Straits in strength, landing at the mouth of the Kranji River. In total 42,610 members of the British Army were taken into captivity, 10, 298 died whilst in Japanese hands. Kranji War Cemetery Before 1939 the Kranji area was a military camp and at the time of the Japanese invasion of Malaya, it was the site of a large ammunition magazine. On 8 February 1942, the Japanese crossed the Johore Straits in strength, landing at the mouth of the Kranji River within two miles of the place where the war cemetery now stands. On the evening of 9 February, they launched an attack between the river and the causeway. During the next few days fierce fighting ensued, in many cases hand to hand, until their greatly superior numbers and air strength necessitated a withdrawal. After the fall of the island, the Japanese established a prisoner of war camp at Kranji and eventually a hospital was organised nearby at Woodlands. After the reoccupation of Singapore, the small cemetery started by the prisoners at Kranji was developed into a permanent war cemetery by the Army Graves Service when it became evident that a larger cemetery at Changi could not remain undisturbed. Changi had been the site of the main prisoner of war camp in Singapore and a large hospital had been set up there by the Australian Infantry Force. In 1946, the graves were moved from Changi to Kranji, as were those from the Buona Vista prisoner of war camp. Many other graves from all parts of the island were transferred to Kranji together with all Second World War graves from Saigon Military Cemetery in French Indo-China (now Vietnam), another site where permanent maintenance could not be assured. The Commission later brought in graves of both World Wars from Bidadari Christian Cemetery, Singapore, where again permanent maintenance was not possible. There are now 4,461 Commonwealth casualties of the Second World War buried or commemorated at KRANJI WAR CEMETERY. More than 850 of the burials are unidentified. The Chinese Memorial in Plot 44 marks a collective grave for 69 Chinese servicemen, all members of the Commonwealth forces, who were killed by the Japanese during the occupation in February 1942. Details taken from the Commonwealth War Graves Commission web sit 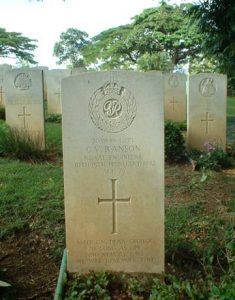