Son of Edwin and Beatrice Onions of Birches Head, Stoke on Trent. Died on the 21st June 1945. Aged 22. Buried at Saint Anne Churchyard, Alderney. Row 6. Grave 1. The memorial plaque can be found at Victoria Street, memorial garden. This is an epitaph written in honour of a great man. No not a political leader or a statesman, but an ordinary sapper. He died a hero’s death not fighting but clearing mines from the fields and beaches in the Channel Islands. To those who chance to read this please say a silent prayer for the equally silent men of the Royal Engineers. Their work in the war is not yet finished. We thank a Gunner of the Royal Artillery for the following epitaph. Epitaph When you return to your Island home Let not rejoicing hearts restrain their joy And meditate, you who have English blood, On our allegiance to the English Throne, Seek English Justice and claim your English Rights, Look on this little mound of fresh cut turf And read his Epitaph: here buried lies The shattered corpse of but a boy, Who gave his life to make your land safe, Returned his English dust to cleanse our soil That this grim corner of the Commonwealth Might once again be England’s. Her field, Her air, and all the azure sea around, All her flowers, birds and every tree, Because this Tommy died for Alderney. The Reverend Arthur Mignot, a local man who served in the forces, leaves flowers on the grave. Two local un-named ladies used to tend the grave. Ex Lance Corporal Martin Hunt, now living on Alderney places a wreath by the memorial plaque on the anniversary of Sapper G.E. Onions death. 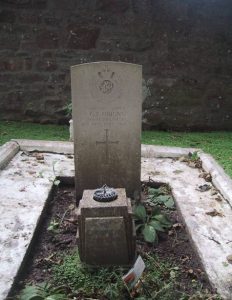 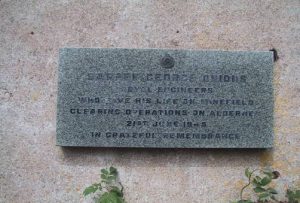