Incident details. On the 21st February 1941, 8 Bomb Disposal Company were working on a bomb in Castle Street, Swansea. When partially uncovered it was found to be fitted with a Type 50, anti disturbance fuse. A bomb could be made safe by either dealing with the fuse or removing the explosive filling. This was done by steam sterilisation. The filling plate was removed or a hole cut into the side, then a jet of steam was inserted, this would melt the cast explosive inside. Here follows the report from Major J.B. James who was Officer in Charge of 8 Bomb Disposal Company of this incident. Sterilisation commenced at 13.30 hours, by Headquarters sterilization staff, Staff Sergeant Munford in charge. At 16.25 the steam was turned off, S/Sgt Munford informed Lieutenant W.D. Rees O.C 103 Bomb Disposal Section that the explosive filling had been steamed out to below fuze chambers level. He recommended bring the bomb out of the hole and finishing the steaming in the back street. Lt Rees realized a second or lower fuze had still to be exposed. Which could be a No 17 Clockwork delay fuze? He was informed by S/Sgt Munford that they had checked using a stethoscope and there was no sound of ticking. Therefore it was decided to lift the bomb clear of the hole. A clamp was attached to the filling end of the bomb, and a rope attached between it and a lorry. Instructions were given for everybody to take cover. When this was done the order to pull was given. Sergeant Finney countered this order as he saw that the rope was slipping, he secured the rope on the lorry. Major James once again gave the order to commence pulling. He was watching the bomb when it exploded. He felt the blast and got under the lorry as debris was falling. When he came out he saw a body on the ground on the far side of the lorry, when he checked he found five others. He believes they came out of cover when the rope slipped and due to where he was standing he did not see them. Staff Sergeant T. Munford, Lance Sergeant T. Henderson, Corporals J. Holder, J. Salisbury, Lance Corporal J. Johnstone, Sapper W. Craig and Driver R. Simpson were killed in the blast. S/Sgt Munford was due to go to London to receive his commission, he was only on site as he had relieved a comrade. Sapper Harry Vallance recalls, that his section was meant to be on this task, however as they had been bust the other section volunteered. Sapper Vallance and section were working on another bomb at the prison, when the other one exploded; they rushed to the scene but could do nothing, except identify their comrades. Lt Rees and Sgt Finney both suffered shock and punctured ear drums and were hospitalised for a considerable period 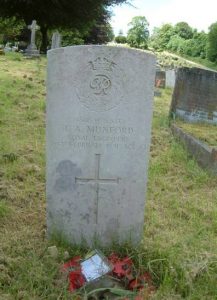