Son of Francis and Hannah Stephenson Martin: Husband of Kathleen Barbara Martin of Copthorne. Died on 22 October 1940. Aged 29. Buried at Cuckfield Cemetery, Sussex. Plot 2 SE Grave 76. George Medal Details. On the 16th September 1940, a large unexploded bomb was reported at Lord Stanhope’s residence at Chevening. Lady Stanhope was at home and seriously ill, she could not be moved. Lieutenant F.R. Martin was detailed to attend this incident. Lieutenant Francis had recently lost four men on another incident and decided to tackle this one by himself, so others were not put at risk. After many hours of solitary digging, he reached the bomb at 04.00 hrs the next day. He extracted the fuse which was still ticking. He certainly saved Lady Stanhope’s life at great risk to himself. He was awarded the George Medal. Sadly five weeks later he died at another incident. 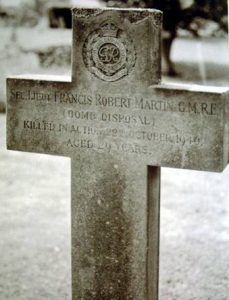