Son of Thomas and Harriet Murray: Husband of Ethel Gertrude Murray of Betley, Cheshire. Died 16 November 2009. Aged 28 Lytham Crematorium. Section S. Grave 319 Note: Corporal Marlton-Thomas was mortally wounded by an improvised explosive device (IED) on Sunday 15 November 2009 whilst conducting a route search to clear devices in the vicinity of Patrol Base Sandford, in the Gereshk area of Helmand province. He died of his wounds on Monday 16 November 2009. Corporal Loren Marlton-Thomas, aged 28, and known as ‘Loz’ to his comrades, deployed on Operation HERRICK 11 as a Royal Engineer Search Team Commander within the Joint Force Explosive Ordnance Disposal (EOD) Group; part of the Counter-IED Task Force responsible for minimising the threat posed to ISAF (International Security Assistance Force), ANSF (Afghan National Security Forces) and the people of Afghanistan. The cornerstone of 4 Troop, 49 Field Squadron (EOD), 33 Engineer Regiment (EOD), in Wimbish, Essex, he deployed to Afghanistan in September 2009 as an Acting Corporal. In the relatively short time that he had been in theatre he had proved himself more than worthy of the rank and responsibilities of a Section Commander. Cpl Marlton-Thomas made the decision to serve his country by joining the Army in 1998. He had his mind set on a life full of challenge, excitement and adventure. He initially considered a life in the Parachute Regiment; however, he quickly found that his talents were better suited to life in the Royal Engineers. In typical Sapper-style he was a man of many talents, a first rate soldier, an extremely competent combat engineer and accomplished blacksmith. Not one for barracks routine he really came to the fore and flourished in the operational environment. Prior to embarking on his career in EOD, ‘Loz’ served in a number of units including 35 Engineer Regiment in Paderborn, 21 Engineer Regiment in Osnabruck and 25 Engineer Regiment in Northern Ireland. His military experience led him to complete operational tours of Northern Ireland on Op BANNER and Iraq on Op TELIC 11. On both tours he served in the Advanced Search Troop giving him a wealth of search experience which translated into him being an exceptional Team Commander. Corporal Marlton-Thomas epitomised the men of courage and nerve that he led; Advanced Search teams, the ‘improvised explosive device hunters’, are a unique breed who stalk their concealed quarry along the tracks and wadis of Helmand. He was extremely proud of this life-saving and critical role that his team performs and demonstrated his true merit as a leader of men in this role. Cpl Marlton-Thomas’s wife, Mrs Nicola Marlton-Thomas, paid the following tribute: Loren was Army-barmy right back to being a Cadet. He did the job he loved and paid the ultimate price for his friends, comrades and country. We are proud to say we knew and loved him. A true hero in our eyes - you may be gone but you will never ever be forgotten. Lieutenant Colonel David Southall, Royal Engineers, Commanding Officer 33 Engineer Regiment (EOD), said: Cpl Loren Marlton-Thomas was a man of great courage and commitment, a gifted Junior NCO [Non-Commissioned Officer] who was truly passionate about his profession. “He revelled in his Search Team Commander role, with skills honed on operations in both Northern Ireland and Iraq. ‘Loz’ was one of life’s optimists who always led from the front; whatever the challenge, you would always find him right in the thick of it. His role, in leading teams to find IEDs, was undeniably amongst the toughest in Helmand province. Despite this, Loz was one of the most irrepressible and positive Junior Commanders I have met. With a smile on his face, his natural charm, confidence and soldiering skill meant men followed him instinctively. Loz made the ultimate sacrifice whilst striving to rid Afghanistan of IEDs and make the country a safer place for both our troops and the Afghan people. Our thoughts are with his wife, Nicola, and family; we share their grief. Loz will not be forgotten. Lieutenant Colonel Gareth Bex, Royal Logistic Corps, Commanding Officer Counter-IED Task Force, said: Corporal Marlton-Thomas was a courageous soldier and a strong leader; his boys loved him. He epitomised the character and bravery required of a Royal Engineer Search Team Commander and his loss will be felt keenly across our close-knit community. “Chatting together in Camp Bastion recently as we both surveyed a starlit Helmand sky, I was impressed by his enthusiasm and immediately taken by his intelligent and thoughtful nature. Immensely proud of his role he waxed lyrical on the jobs he and the boys had done so far. “His pride and dedication is an inspiration to us all, and we will not let his death be in vain. He knew more than anyone that his job was dangerous, but understood that his role was vital to the security of decent Afghans. 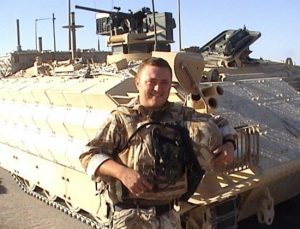