Son of Tay Buck Sim of Singapore Died on the 10th June 1945. Aged 24. As a prisoner of the Japanese. Column 41 Prisoner of the Japanese. 1 Malaya Bomb Disposal Company, was part of the Singapore Fortress. In total 42,610 members of the British Army were taken into captivity, 10, 298 died whilst in Japanese hands. Within Kranji War Cemetery stands the SINGAPORE MEMORIAL, bearing the names of over 24,000 casualties of the Commonwealth land and air forces who have no known grave. Many of these have no known date of death and are accorded within our records the date or period from when they were known to be missing or captured. The land forces commemorated by the memorial died during the campaigns in Malaya and Indonesia or in subsequent captivity, many of them during the construction of the Burma-Thailand railway, or at sea while being transported into imprisonment elsewhere. The memorial also commemorates airmen who died during operations over the whole of southern and eastern Asia and the surrounding seas and oceans. The SINGAPORE (UNMAINTAINABLE GRAVES) MEMORIAL, which stands at the western end of the Singapore Memorial, commemorates more than 250 casualties who died in campaigns in Singapore and Malaya, whose known graves in civil cemeteries could not be assured maintenance and on religious grounds could not be moved to a war cemetery. The SINGAPORE CIVIL HOSPITAL GRAVE MEMORIAL stands at the eastern end of the Singapore Memorial. During the last hours of the Battle of Singapore, wounded civilians and servicemen taken prisoner by the Japanese were brought to the hospital in their hundreds. The number of fatalities was such that burial in the normal manner was impossible. Before the war, an emergency water tank had been dug in the grounds of the hospital and this was used as a grave for more than 400 civilians and Commonwealth servicemen. After the war, it was decided that as individual identification of the dead would be impossible, the grave should be left undisturbed. The grave was suitably enclosed, consecrated by the Bishop of Singapore, and a cross in memory of all of those buried there was erected over it by the military authorities. The 107 Commonwealth casualties buried in the grave are commemorated on the Singapore Civil Hospital Grave Memorial. Kranji War Cemetery and the Singapore Memorial were designed by Colin St Clair Oakes. Details taken from the Commonwealth War Graves Commission web site. 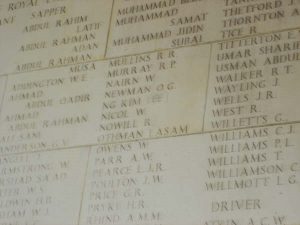 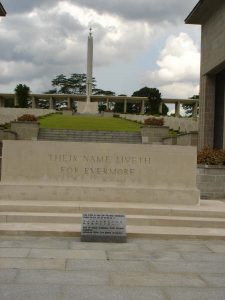 Commemorated on the Singapore War Memorial