Son of Mr and Mrs Henry Langley of Saint Helens, Lancashire. Died on the 7th July 1942. Aged 21. Buried at El Alamein War Cemetery, Egypt. El Alamein War Cemetery. The campaign in the Western Desert was fought between the Commonwealth forces (with, later, the addition of two brigades of Free French and one each of Polish and Greek troops) all based in Egypt, and the Axis forces (German and Italian) based in Libya. The battlefield, across which the fighting surged back and forth between 1940 and 1942, was the 1,000 kilometres of desert between Alexandria in Egypt and Benghazi in Libya. It was a campaign of manoeuvre and movement, the objectives being the control of the Mediterranean, the link with the east through the Suez Canal, the Middle East oil supplies and the supply route to Russia through Persia. EL ALAMEIN WAR CEMETERY contains the graves of men who died at all stages of the Western Desert campaigns, brought in from a wide area, but especially those who died in the Battle of El Alamein at the end of October 1942 and in the period immediately before that. The cemetery now contains 7,240 Commonwealth burials of the Second World War, of which 815 are unidentified. There are also 102 war graves of other nationalities. The cemetery was designed by Sir Hubert Worthington. 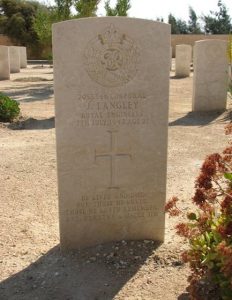 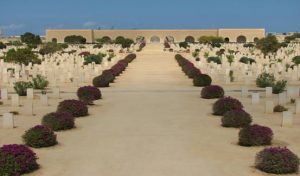