At approximately 11.45 am on the 12th March 1945, 194 Platoon of 20 Bomb Disposal Company were working on minefield 833 at The Suttons, Broomhill. Lance Corporal G. Gray was operating a mine detector and Corporal J. B. Harrison was exposing and disarming the mines Sergeant E. David, who was in charge of the clearance saw Lance Corporal Gray locate a mine with the detector. Corporal Harrison uncovered the mine and stated that it appeared quite normal. Sergeant David moved to a safe distance, about 25 yards away, as laid down in operating procedures. Lance Corporal Gray was closer by, about 25 feet away. As Corporal Harrison attempted to disarm the mine it detonated. It left a crater five feet deep by six feet wide Corporal Harrison was killed by the explosion. Lieutenant R. King and Sergeant David had to sweep and clear a path another 25 yards to recover Corporal Harrison’s body which lay wedged against the beaches breakwater. 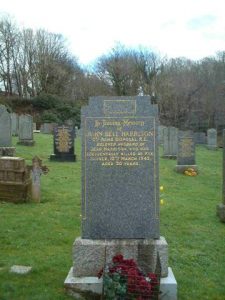