Incident Air Raid on Tuesday 3rd December 1940 Soon after 3pm an enemy aircraft was engaged by the BMARCo factory defence guns, manned by works staff on Home Guard duty. The plane was hit, damaged and driven off, but not before it had released four bombs on the town. One of the bombs landed on sidings between the station and Springfield Road bridge, but it did not detonate. Bomb disposal experts were sent for. The following day, bomb disposal team excavations exposed a 1,000lb bomb. The officer, Lt. John Ernest Gilkes of Leamington Spa, reported that the bomb was fitted with two detonators, each equipped with a booby trap device. Its time fuse could be heard ticking. If not stopped it was likely go off sometime during the following 10 days. At 3.15pm the area was cleared so that Gilkes could attempt to make the bomb safe to remove. Three minutes later a terrific explosion rocked the station area, blasting two policemen who were approaching to check on progress. The courageous Lieutenant died instantly. Inspector Curry, one of the policemen, wrote in his report of the incident, I have nothing but admiration for the dauntless courage of this officer [Lt. Gilkes]. I am convinced that he knew he was taking a risk which was almost certain to cause his death. He took that risk cheerfully, however. One of his last remarks to me before I left him was, “Well, when you come back I shall most probably be on my way to St Peter.” Further information can be found here : The Railway at Grantham in Wartime 1939-1945 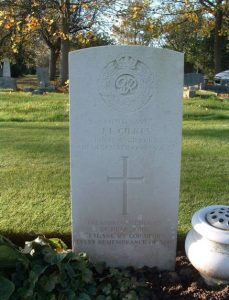