Son of Alfred and Elizabeth Gaylor: Husband of Ruth Mabelle Gaylor of Llanishen, Cardiff. Died on the 7th August 1946. Aged 30. Buried and Commemorated at Abney Park Cemetery. Section N 6 Joint Grave RN 62507. Screen wall Panel 10. Personel George Medal and Incident Details George was born in Stevenage and educated at the Letchmore Road School. After leaving school he was employed at ESA in Stevenage for four years in the firmspaint-dipping workshop. When he reached 18 years of age he decided to join the Army and entered his fathers old corps, the Royal Engineers. George served in Maltafor four years and left the Army just before the outbreak of war. As a reserve he was re-called to the service when the war began and again served with the Royal Engineers. He was employed on bomb disposal work and was eventually commissioned as a Lieutenant. It appears that he also helped to train saboteurs and covert operatives at the Commando training school at Tatlers Farm near Stevenage. George then married a girl named Ruth and they had two children, Anthony & Janet. He was awarded the George Medal for Bomb Disposal underwater in the wreckage of the Railway Bridge across the Albert Canal at Hasselt, Belgium between the 6th-8th November 1944. He acted as the company diver and went down some 30ft under the water into the wreckage after the retreating German forces had destroyed the bridge. An explosive device containing three fuses was still live and George managed to successfully defuse the bomb and allow the British forces to carry on building a new railway bridge for the advancing allied forces. After the war had ended George remained in the Army and was employed on the dangerous work of clearing British mines and bombs from the coastline. On the 7th August 1946 George was off duty when some mines were detected at Rattery Head, a beach north of Aberdeen. He volunteered to go out to the site with Corporal J. Fordyce and Sapper A. Hurley, one of whom had only been with the company for three weeks. During the process of defusing the mines one of them exploded and killed all three members of the team. His body was transferred to London and he lays buried in the Abney Parkcemetery, Stoke Newington, London. 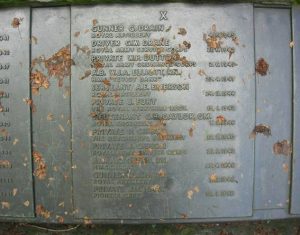 Photo sent in by Chris Ranstead