Son of Michael Joseph and Grace Marie Cunninghham. Died on the 6th May 1944. Aged 32. Spec Memorial in Saint Lawrence Churchyard Extension. Catsfield, Sussex. On September 20th 1940, a German daylight raid against London was attacked by fighter command. Near Rye a Heinkell 111 was badly damaged by three RAF fighters and two others crash landed. Just before crashing one of the planes unloaded its bombs on Back Door Field, Billingham Farm, in the village of Udimore, nearRye. In 1940 three of the bombs from this aircraft were made safe and removed. Three other bombs fell onto muddy ground. As these were dug for they sank lower into the ground. Due to the high demand on Bomb Disposal Units and the low threat presented by these bombs, they were abandoned, till a later date. By 1944, the Ministry of Agriculture wanted to return the field back to agricultural use. Two bombs were successfully defused. Lieutenant G.C. Cunningham and Sergeant G. Mack were instructed to deal with this final bomb. They were stationed about 12 miles away near Catsfield, in a large house called Burntwood. Sergeant G. Mack and a squad of sappers arrived, dug a shaft and uncovered the bomb. Lieutenant G.C. Cunningham was on site as it was his job to defuse the bomb. It would seem that Lieutenant G.C. Cunningham was down the shaft and Sergeant G. Mack stood at the top looking down, when the explosion occurred both men died. Lieutenant G.C. Cunningham was of Irish descent, born in Ohio, USA, Sergeant G. Mack was born in Ayr Scotland. Both men were unmarried. On the 6th May 2004, 60 years to the day of the incident, about 40 people and the press led by both Army and Air force Standard Bearers. Went to the dual headstone set in Saint Lawrence Churchyard. A ceremony in tribute to these brave men was conducted. Poppy wreaths were laid and the Last Post sounded, it rang across a quiet countryside accompanied by the musical sound of a blackbird. The above account was taken from a small booklet in Saint Lawrence Church, Catsfield, Sussex. This had been researched by John Hannaford, who served as a Captain with Bomb Disposal during WW 11. 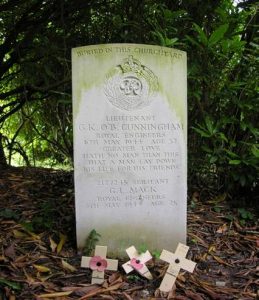