MBE - Son of James John and Kathleen Myrtle Connors: Husband of Violet Marie Therese Connors of Leeds. Born on the 4th September in 1898 in India Died on the 3rd August 1944. Aged 46. Captain Conners was killed while defusing a bomb on a beach in Yorkshire after distinguished service with the Royal Engineers since WW1 and had been involved with Bomb Disposal since the start of the blitz in London. He was awarded the MBE posthumously and this was given to his son Terrance by the then Princess Elizabeth. Terrence was the eldest of four sons Terrence, Colin, Roderick and Sean. There were seven daughters Colette, Mignonne, Camilla, Delphine, Lorraine, Irmina and Imelda. Captain Connors father James served as a Bandsman with the  Border Regiment while serving in India. Buried at Leeds Roman Catholic Cemetery. Section E Grave 275. Believed to have died clearing mines in the north of England. 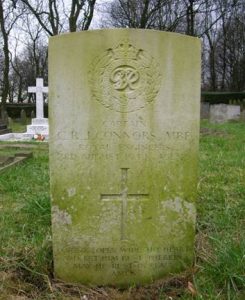