Son of Frank Hughes Carlile and of Ethel Rowena Carlile, (nee Grubb): Husband of Ivy Carlile of Littlehampton. Died on the 14th August 1943. Aged 42. Buried at Horsham Hills Cemetery, Sussex. Block U Grave 356. Note: On the 14th August 1943 Captain F.V. Carlile was posted to 12 Bomb Disposal Company, Horsham, Sussex from London. He was inspecting a collection of mines and fuses when one exploded killing him. Captain Carlile was an experienced Bomb Disposal Officer. He had made safe a 500kg unexploded bomb, buried under the Bakerloo Underground line, near Lords Cricket Ground on the 18th January 1943. This was thought to have a standard fuse, which had not functioned. The fuse was pumped with fluid to discharge any electric left in the fuse. He then took it to Hampstead Heath, Bomb Cemetery. Where he attempted to remotely remove the fuse. As this did not work he used a crowbar, hammer and cold chisel. When he removed the fuse it was found not to be of the normal type. It was longer and had a ring attached. It was a new type of fuse. It had a fault in its circuitry. Its function was to detonate when moved or fluid pumped in. These were a Y fuse. A method of freezing the fuses battery was developed to counter this. On the 4th February 194E, Captain Carlile was injured whilst working on another Y fuse. He was down a shaft with a bomb under a house. A new liquid oxygen freezing method had been developed. Somehow the oxygen rich atmosphere ignited. He was connected to the safety point by intercom, which strapped to him helped protect his face from the flames. As he climbed the now burning ladder his squad went to his assistance and extinguished the flames. Badly burnt he was taken to hospital. Major Martin who was on site continued with the operation and re-froze the fuse and disarmed the bomb without further incident. Details extracted from Bomb Disposal British Casualties of WWII. Chris Ranstead. 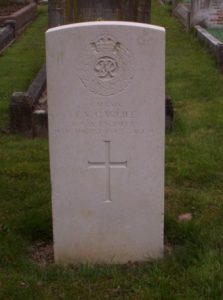