Incident details. On the 14th October 1940 at Chapel Street, Coventry, 2nd Lieutenant A.F. Campbell, Sergeant M. Gibson, Sappers W. Gibson, R. Gilchrest, A. Plumb, R.W. Skelton and Driver E.F.G. Taylor were tasked to deal with a 250 kg unexploded bomb. After nearly four days it was uncovered, it was fitted with standard fuses, these were so badly damaged that they could not be removed. The electrical charge was thought to be dissipated by now, however Campbell applied a discharge tool just in case. On the 18th October 1940, 2nd Lieutenant Campbell believed the bomb was inert and could be moved. It was loaded onto a lorry and taken to a safe open space outside Coventry, possibly Whitley Common. As it was being unloaded it exploded killing all. Both 2nd Lieutenant A.F. Campbell and Sergeant M. Gibson were awarded posthumous George Cross’s for Bomb Disposal tasks. Details taken from Bomb Disposal, British Casualties of WWII. Chris Ranstead.

The following details have been taken from the London Gazette, 22nd January 1941. The King has been graciously pleased to approve the award of the George Cross, for most conspicuous gallantry in carrying out hazardous work in a very brave manner, to 2nd Lieutenant A.F. Campbell, R.E. (since deceased). 2nd Lieutenant Campbell was called upon to deal with an unexploded bomb in the Triumph Engineering Company’s works in Coventry. The bomb had halted war production in two factories involving over 1,000 workers and evacuation of local residents. He found it to be fitted with a delayed action fuse which was impossible to remove. He decided to remove the bomb to a safe place. This was done with by lorry with 2nd Lieutenant Campbell lying alongside the bomb to enable him to hear if it started ticking so he could warn the driver to escape. Having got it to a safe place he successfully disposed of it. Unfortunately, he was killed the next day whilst dealing with another unexploded bomb. 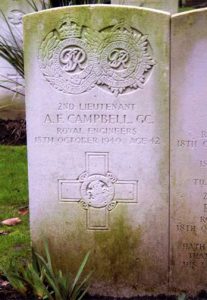