Son of George Herbert and Jessie Burt of Saint Budeaux, Plymouth. Died on the 19th February 1943. Aged 39. Buried at Kanchanaburi War Cemetery. Grave 2 F 54. Kanchanaburi War Cemetery. Prisoner of the Japanese. 1 Malaya Bomb Disposal Company, was part of the Singapore Fortress. In total 42,610 members of the British Army were taken into captivity, 10, 298 died whilst in Japanese hands. The notorious Burma-Siam railway, built by Commonwealth, Dutch and American prisoners of war, was a Japanese project driven by the need fir improved communications to support the large Japanese army in Burma. During its construction, approximately 13,000 prisoners of war died and were buried along the railway. An estimated 80,000 to 100,000 civilians also died in the course of the project, chiefly forced labour brought from Malaya and the Dutch East Indies, or conscripted in Siam (Thailand) and Burma (Myanmar). Two forced labour forces, one based in Siam and the other in Burma worked from opposite ends towards the centre. The Japanese aimed at completing the railway in 14 months and work began in October 1942. The line, 424 kilometres long, was completed by December 1943. The graves of those who died during the construction and maintenance of the Burma-Siam railway (except for the Americans, whose remains were repatriated) were transferred from camp burial grounds and isolated sites along the railway into three cemeteries at Chungkai and Kanchanaburi in Thailand and Thanbyuzayat in Burma. Kanchanaburi War Cemetery is only a short distance from the site of the former Kanburi, the prisoner of war base camp through which most of the prisoners passed on their way to other camps. It was created by the Army Graves Service who transferred to it all graves along the southern section of the railway, from Bangkok to Nieke. Some 300 men who died during an epidemic at Nieke camp were cremated and their ashes now lay in two graves in the cemetery. The names of these men are inscribed on panels in the shelter of the pavilion. There are 5,084 casualties of the Second World War buried or commemorated in the cemetery. There are also 1,896 Dutch War Graves. Within the entrance building to the cemetery will be found the Kanchanaburi Memorial recording the names of 11 men of the army of undivided India buried in Muslin cemeteries in Thailand, where their graves could not be maintained. The cemetery was designed by Colin St Clair Oakes. Details taken from the Commonwealth War Graves Commission web site. 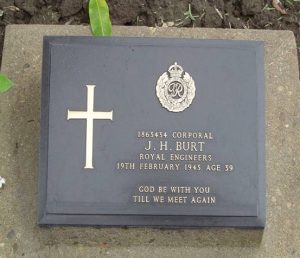