Incident. Lance Sergeant C.F. Bristow. GM, was injured on the 1st April 1942 working with Lieutenant J.P. Walton GM dealing with a Yellow Peril balloon bomb, on Halfway House Marshes, near Great Wakering. Lieutenant J P Walton GM was killed and Lance Sergeant C F Bristow was injured he died of his wounds 3 days later. George Medal details. On the 5th November 1940, as then Corporal C.F. Bristow was assisting Lieutenant J. Walton with a 250kg bomb fitted with a clockwork time delay fuze and a sensitive anti disturbance fuze. This was inside a gasometer at Romford, Essex. Due to the gas they could only work for twenty minutes at a time. Whilst working in these dangerous and arduous conditions an air raid was also in progress. For their efforts both men were awarded the George Medal. Details extracted from The Dangers of UXB’s. Lt Col E.E. Wakeling.

Son of Fred and Rose Bristow: Husband of Elsie Bristow of Cranwell village Died on the 4th April 1942. Aged 43 Buried at Saint Andrew Churchyard, Cranwell Plot 1 Row B Grave A 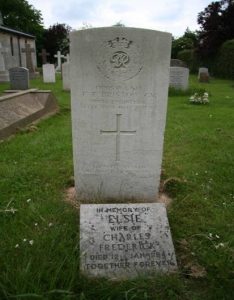