Son of Walter and Jane Briscoe: Husband of Alice Briscoe of Shaw. Died on the 8th December 1944. Aged 34. Buried at Crompton Cemetery. Plot 77 Grave 12071. Note: On the 18th December 1944, a minefield at Wykes Regis was being cleared. Lieutenant L.H. Morgan was in charge of this operation. There was an explosion and Lance Corporal W. Briscoe was killed a number of others including Lieutenant Morgan were wounded. Lieutenant Morgan entered the live section of the minefield to remove the wounded and Lance Corporal Briscoe’s body. 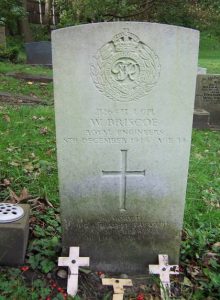