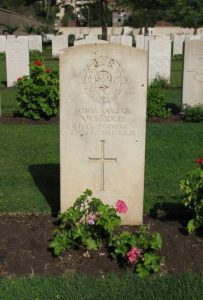 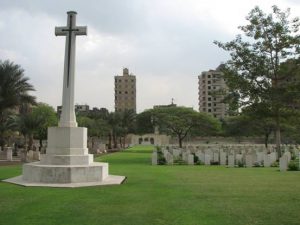 General Headquarters, Middle East Command, was set up in Cairo shortly before the Second World War, remaining there throughout the war years. In January 1941, a Royal Air Force Sector Headquarters for Fighter Defence Canal Zone was established. Cairo was a significant hospital centre during the Second World War. Cairo War Memorial Cemetery was formerly part of the New British Protestant Cemetery, but plots B, D, F, H, K, M, O, P and Q were ceded to the Commission in 1920. Some graves were brought into these plots from elsewhere in the Protestant cemetery and later, 85 First World War graves were concentrated from Minia War Cemetery, 200 km south of Cairo, where maintenance could not be assured. One burial of the Second World War was moved from Old Cairo Old Latin Cemetery for the same reason. There are now 2,057 Commonwealth casualties of the First World War and 340 from the Second World War buried or commemorated in the cemetery. A small number, known to have been buried in other civil cemeteries in Cairo but whose graves are now lost, are commemorated by special memorial. Burials in the following civil cemeteries are now alternatively commemorated in Cairo War Memorial Cemetery: Cairo (Basatin) Jewish Cemetery Old Cairo Jewish Cemetery Cairo Maronite Cemetery Cairo Civil International Cemetery Old Cairo New Latin Cemetery