Died on the 30 October 2010. Aged 39. Notes: Sapper Blanchard was killed as a result of a gunshot wound suffered whilst he was dealing with a suspect explosive device in the Nahr-e Saraj (North) area of Helmand province. Sapper Blanchard deployed to Afghanistan on 17 September 2010 as part of the Counter-Improvised Explosive Device Task Force. Trained to assist in the preparation and operation of explosive ordnance disposal equipment and the recognition and management of conventional munitions, he was part of an improvised explosive device destroy team operating in Helmand province. On 30 October 2010 his team was in the process of destroying a device when they were engaged by small arms fire. During the engagement Sapper Blanchard was struck by a bullet and died from the injuries he sustained. Sapper Blanchard, aged 39, from Gosport in Hampshire, joined 221 Field Squadron (Explosive Ordnance Disposal) (Volunteers), part of 101 (City of London) Engineer Regiment (Explosive Ordnance Disposal), in 2007. He completed his basic training and then his elementary explosive ordnance disposal course before volunteering for mobilisation in 2010. Once mobilised he joined 61 Field Squadron (Explosive Ordnance Disposal) for mission specific training in Woodbridge before deployment. A friendly, well-considered and down to earth individual, he was the cornerstone of the reservist element within the Task Force. He aspired to attempt officer selection on completion of his operational service and was already showing many of the hallmarks of a great leader. A radiation protection officer by profession, he gained a double honours degree in Chemistry with Organic Chemistry and a Masters in Biomedical Pharmacology at the University of Southampton. He leaves behind a large family including his wife, Suzanne Blanchard, and his children, Tom and Lucy Rees-Blanchard, his father, The Reverend Canon Lawrence Blanchard, and six brothers, Tom, Dan and Ned Blanchard and John, Chris and Shane Sargeant. Sapper Blanchard’s wife, Mrs Suzanne Blanchard, said: "Will was a wonderful husband, son, brother, father, brother-in-law, son-in-law and friend. Sorely missed, always in our hearts, never forgotten by his devastated family, friends and colleagues and his beloved wife." Lieutenant Colonel Mark Davis, Commanding Officer, Counter-Improvised Explosive Device (C-IED) Task Force, said, "Sapper Blanchard was a father figure to the younger elements of the squadron. He was always concerned with their development and welfare, always displaying an interest in what they were doing, and always keeping them informed - he was the consummate professional and it was not for nothing that he was known as ‘the Colonel’!" He was a perfectionist but one who had endless patience with his fellow soldiers, he was both impeccable and irreplaceable; people like Sapper Blanchard only come along once in a blue moon. Sapper Blanchard brought a wealth of knowledge and experience from his civilian employment into the Territorial Army and onwards into the C-IED Task Force. I clearly remember his unique brand of intellectual humour and his ability to ‘read’ the bigger picture which enabled him to place his vital contribution into context. He had a laid back approach and oozed confidence which was delivered with inner steel. He was a widely-loved character who kept others going in times of adversity with his capacity to relate to people, to spread his knowledge and to care for them, and, of course, he often made them step back in amazement with his enthusiasm for detail, be it reading instruction manuals or field testing the latest piece of EOD [explosive ordnance disposal] equipment to ensure that it ‘did what it said on the tin’! 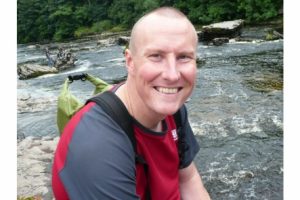 Husband to Suzanne and father to Tom and Lucy 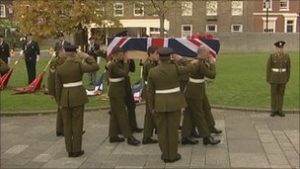 A full military funeral was held on the 22 November 2010 at the Anglican Cathedral, Gosport.

Many attending wore orange which was Williams favourite colour.