Captain R. Bingham had successfully dealt with numerous butterfly bombs. However on the 6th March 1943, he was on Epsom Downs in Surrey, clearing butterfly bombs. He placed a charge next to the bomb and retired to a safe distance inside an armoured car, as the ground around was open and afforded no protection. The bomb exploded as planned however a piece of shrapnel came through an observation slit in the armoured car that Captain Bingham was looking out of. He died instantly. Details from Bomb Disposal Casualties of WW11. Chris Ranstead and The Danger of UXB’s. Lt Col E.E. Wakeling. 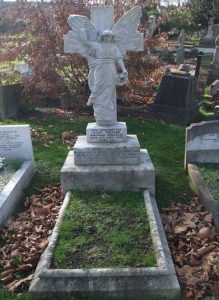