On the 15th October 1944, at Hopton in Suffolk, Major Deane T.J. Officer Commanding, 10 Bomb Disposal Company, Captain Yard and Lieutenant C.J. Bassett went to investigate the crash site of a V1. On arriving at the site they found the wreckage to be widely spread. The fuse pockets had become separated from the main charge in the crash, however they were still quite close. As the three officers continued to inspect the crash site one of the fuse pockets exploded, killing Lieutenant Bassett and wounding his fellow officers. Lieutenant C.J. Bassett is buried in his hometown of Westerham, Kent. (Details extracted from Bomb Disposal British Casualties of WWII. Chris Ranstead) 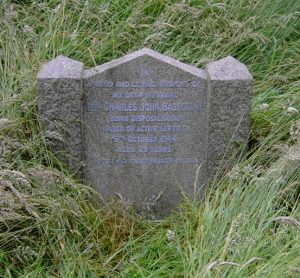