Died 19 October 2010. Aged 24. Buried at Tring Cemetery, Essex. Grave 992. Notes: Corporal Barnsdale deployed on his second tour of Afghanistan in September 2010 with the Counter-Improvised Explosive Device Task Force. Trained as the commander of a Royal Engineers Search Team, he was responsible for the detection of improvised explosive devices in areas deemed to be high risk. On 19th October 2010 his search team were deployed on Operation OMID CHAR - operating in an area east of Gereshk, working towards the construction of a new checkpoint and patrol base to enhance the security of the local population. During the task Corporal Barnsdale was caught in the blast from an IED which resulted in his death. Lieutenant Colonel Simon Bell, Commanding Officer, 33 Engineer Regiment (Explosive Ordnance Disposal), said:Corporal David Barnsdale’s loss has been a great shock to the regiment. A young Junior Non-Commissioned Officer with boundless potential and the steely understated determination of a man you know you can rely on in difficult times.His operational service has been exemplary, with busy tours of Iraq and Afghanistan showing the breadth of his talents and a level of experience uncommon in a Lance Corporal. It gave me great pleasure to welcome him into the regiment as I knew he would quickly become a valuable asset and I have not been disappointed. My overwhelming memory of Corporal Barnsdale will be his irrepressible enthusiasm and no-nonsense approach. Always wearing a wry smile wherever he was and whatever he was doing, always happy to set you straight and voice an opinion, a truly refreshing trait. He had a bright future ahead of him either in explosive ordnance disposal or out in the wider Corps. He was a key player in the regimental dynamic and his squadron will be a lesser place without him there. On behalf of the regiment I convey my deepest heartfelt sympathies to Corporal Barnsdale’s mother, Wendy, his father Stephen, and his sister Vanessa. David Barnsdale was simply a first rate soldier and leader of men. Major Rod Brown, Officer Commanding 61 Field Squadron (Explosive Ordnance Disposal), said: Soldiers like Corporal David Barnsdale are the sturdy foundation on which the Army is built. His selfless devotion to those under his command and his unique ability to see the good in every situation was equalled only by his professionalism and drive. Whenever I asked his Troop Commander, Captain Sinnott, for a Junior Non-Commissioned Officer for an ‘opportunity’, he would, without hesitation, volunteer Lance Corporal Barnsdale who, with great enthusiasm, would use the ‘opportunity’ to shine amongst his peers. It was therefore an easy decision to award a Junior Non-Commissioned Officer of his calibre the rank of Corporal in order to give him the opportunity to command a search team on operations in Afghanistan. I knew that Corporal Barnsdale would not let me down; it was clear from the start that his team drew great strength from his presence and his Troop Commander understandably had great faith in him. A fun-loving and outgoing individual, Corporal Barnsdale contributed a great deal to the personality of the squadron. His inclusive attitude, buoyant personality and lust for a good social have marked his time in the squadron. He enjoyed his sports, especially football, and contributed to the squadron’s sporting successes on a number of occasions in the face of a very competitive field. With imminent promotion and a bright future ahead of him, Corporal Barnsdale’s death is a tragic loss to his squadron, regiment, Corps and Service. I cannot imagine the grief that his family are currently suffering but they should know that our thoughts are with them at this most difficult of times. He will be sorely missed by his friends and colleagues alike. Corporal David Barnsdale was laid to rest on the 11th November 2010. A Remembrance ceremony took place at Tring war memorial prior to his funeral attended by members of the Regiment. The church could not contain all and around 100 listened to the service through speakers outside. All though it rained nobody retired. A fitting tribute to Cpl David Barnsdale. 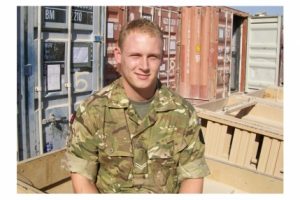 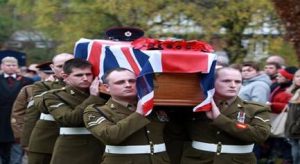