Son of William and Josephine Victoria Cecila Andrews of Taunton: Husband of Hilda Alecia Andrews. Died on the 30th July 1944. Aged 35. Buried at Saint Mary’s Cemetery, Taunton. Grave 2/4242 George Cross Citation The following details were given in the London Gazette on the 17th September 1940. On the 26th August 1940. Second Lieutenant W.L. Andrews R.E was in charge of No 22 and 23 Bomb Disposal Sections, R.E., who were given the task of extracting the fuse of a bomb. Some difficulty was experienced, and several attempts at removal were unsuccessful. This officer then placed his section under cover and he succeeded in exploding the bomb. He was blown a considerable distance. Throughout, Second Lieutenant Andrews displayed great coolness and keenness in the interests of the Service. This incident where he was awarded the George Cross was at Crohamhurst Golf course, near Croydon. While trying to remove the fuse using a length of string tied to the fuse discharger, attached to the top of the fuse, the bomb exploded He died on the 30th July 1944. A Further incident. On New Years Day 1941 Lieutenant Wallace was called to an unexploded bomb at Hercules Road, in Marshall’s Garage. Just outside Waterloo Station, London. He arranged for a line of coal trucks to be put on the track adjacent to the garage to shield the rest of the railway in case it exploded and dealt with the bomb. 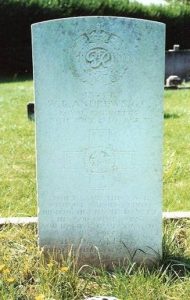